The temperature is soaring and it’s getting hotter by the day. Hence, our style post on the best linen fabrics perfect for summers, is rather timely! But what is linen? Linen clothing is natural as the fabric itself is derived from a plant. Read about the 3 types of linen fabric you should be making place for in your closet!

When summer arrives, so does the time for wearing light and breathable clothes. It is important to let your skin breathe, especially during the summers where we tend to sweat a lot. One of the ideal clothing to wear during this hot and humid weather is linen. Linen fabric properties tend to keep you cool, easy and breezy. Even though we want comfort, style can’t be compromised. One such example is of the linen blazer with jeans which sets out to give an absolute dapper look. Linen clothing gives you the best of both. But even in linen, there are a number of different fabrics. So which is the are the best linen fabrics you should opt for and what is linen exactly? Read on!

What is linen? Types of Linen fabric great for your body & closet!

So, what is linen fabric? Linen is a natural fiber which is derived from a plant known as “flax”. It is made from the fibers of the flax plant Linum usitatissimum. Be it beddings, canvases, wallpaper, clothing, there have been a number of uses of linen due to its great durability. Egyptians used linen fabrics to wrap pharaoh mummies due to its great durability. Linen was the very first fabric to be created! It has been used for many years and has definitely gained its popularity among different cultures. This makes the linen history very interesting. Linen clothes have often been passed down generations as a gift, but what makes it so special that this material can survive for years and years on end. Linen fabric properties don't just end at durability; there are a ton of other properties which make linen the ideal cloth for summers. Linen fashion is at its peak during summers.

To begin with, linen clothes have a high absorbing power. To be precise, linen clothing can absorb up to twenty percent of its own weight before starting to feel wet or damp. This makes it a very good material to wear as it can absorb a lot of sweat. Also, linen is quite durable. Linen material is naturally a thick material especially when compared to other materials like cotton. Another good quality is that linen doesn't lose its shape.

As linen material isn't very elastic, your clothes don't lose their shape easily. This means that you can wear linen clothing for a longer period of time without it losing its shape in the wash. Also, the more you wash it the more linen becomes softer to wear. Different types of linen fabric are eco-friendly and sustainable which is great for the environment.

Linen clothes are very breathable. Not only does linen absorb moisture quickly, it releases it as quickly as well. Due to this, the cloth dries out early. This is very beneficial as it means that you won't have sweaty clothes clinging to your body. Linen is a natural insulator. Natural linen fabric tends to trap the heat of your body in during winters, hence retaining it and keeping you warm. In summers, it tends to absorb heat from your body and pushes it out. There are a number of different linen fabric types that you can pick from.

Cotton has often been called as the ideal cloth for summers. But is that really the case or is it just something that has been passed down different generations? As we know, linen fabric properties are numerous. So what is the difference between cotton and linen? Which is better from the linen vs cotton shirts tug of war? Before answering that, let me tell you what cotton is. Cotton is also a natural fiber, but it comes from the cotton plant. They are fluffier when compared to linen and as a result tend to be softer. They are breathable but absorb moisture and don't dry very quick

Natural linen fabric tends to soften up after a number of washes. It is a little crispy to touch and doesn't soften very quickly. This becomes a great property as linen clothing/bedding can be passed down years without losing their shape. They only get softer to touch and more comfortable. In comparison, cotton is quite fluffy from the start and as a result is softer. Natural linen fabric is the most durable fabric. In fact it is so durable that it is often used in currency to make it stronger. Cotton can be made strong if it is spun a number of times. But even then, it doesn't even come close to the strength and the durability of all types of linen fabric. It is a great conductor of heat as it is made of long and hollow fibers. Even though cotton has a good absorbing power, it doesn't push out the heat quickly and after a point it starts sticking to your body. As linen is hypoallergenic, it is the ideal cloth for anyone who suffers from allergies or has sensitive skin. It also naturally repels bacterial growth, which is a plus point.

Types of linen fabric that’ll keep you cool this summer!

There are a number of different linen types that fall under linen material. It is upon you to decide which type is the best linen fabrics for you. A few linen fabric types are plain woven and sheeting. Plain woven linen fabric is also known as glass toweling linen as the most common use of this type is wiping glassware. This has a loose weave and is highly absorbent which makes it ideal for cleaning up. Sheeting linen is comparatively a heavy linen and is used to manufacture sheets. There are many different types of linen, but Irish Linen, Belgian Flax Linen, and Japanese Linen are being highly used in today's date. These linen fabrics make for the best linen shirts. 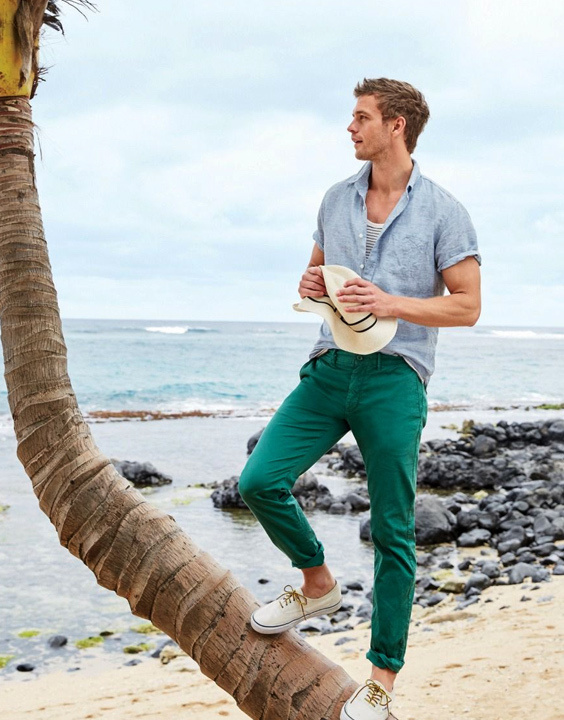 So what is Belgian linen? Belgian Linen is made up entirely of European Flax. Flax is the only natural fiber in the entire world that is harvested, grown, and cultivated in Western Europe. It is one of the best types of linen. Also, Belgian linen yardage is great which leads to better usage. Japanese linen is slowly gaining popularity. This type of linen focuses on clothes that can be worn throughout the year. Japanese linen dresses are considered to be one of the most beautiful dresses in the entire world. Japanese linen clothing is quite popular in demand.

Even though linen might appear to be slightly expensive as compared to some other textiles, it is definitely an investment worth making. Linen fabric properties are numerous. This is a cloth that becomes more beautiful as time passes. It can be passed down for generations due to its durability and texture. Linen clothes definitely make the ideal wedding gift as it can be passed to their children and then their grandchildren. These are perfect for different weathers and are quite stylish to look at as well. You can make clothes made of linen into style statements, as they tend to look good in every weather. We are sure that these types of linen fabric will make your summer better and cooler. So go ahead and take your pick!

Image credits: The copyrights of the images used in this post belong to their respective owners. The credits where known are specified under the image - if you're the owner of an image and want it removed, please contact us.
Share. Facebook Twitter WhatsApp Pinterest LinkedIn Telegram
Previous ArticleHow To Wear A Blazer : 4 Black Blazer Combinations You’ll Love!
Next Article 5 Different Types Of Shrugs – Trendy Shrug Styling Ideas

What To Wear With A Men’s Polo T-Shirt: Complete Your Look

What To Wear With A Men’s Polo T-Shirt: Complete Your Look

What to Wear With an Oversized T-Shirt: Style Tips For Men & Women