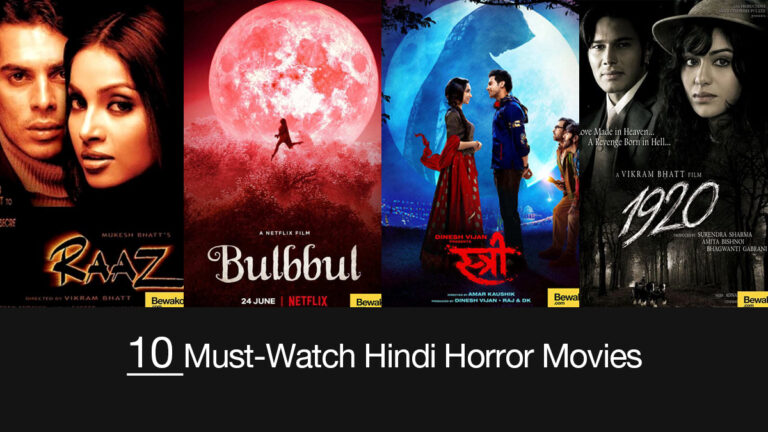 It has been noticed in recent times that the Hindi Horror Movies scene in Bollywood has taken a 360 degrees turn in the last 2 decades. Most of the Bollywood horror movies in the previous years used to have an old-world charm with a storyline relevant to that era, but with the betterment in technology, the quality of VFX used in Bollywood Horror Movies has gone up by several notches! As skeptical as we are about the existence of supernatural entities, the producers of our Indian Film Industry were as skeptical about investing in the horror genre. However, we see that the trends have indeed changed now. Our film producers have understood the potential this genre has and are more open towards tapping this potential. Wondering which is the most dangerous horror movie in Hindi? In the mood to binge-watch some? Please read on, as our list of the top 10 scariest Hindi Horror Movies is sure to come in handy!

Director: Vikram Bhatt Cast: Bipasha Basu, Dino Morea, Ashutosh Rana IMDB rating: 6.5/10 ll 73% Google users liked this film Sensually scary, that’s the first term that comes to mind when we speak of this Hindi Horror movie. The storyline revolves around Sanjana and Aditya Dhanraj (Bipasha Basu and Dino Morea respectively). Sanjana and Aditya take a trip away from home with the intent of rekindling the spark in their marriage which is falling apart. They decide to go to Ooty, as that’s where they’d first fallen in love. However, things take an ugly turn when sinister events start happening around them! Sanjana often encounters ghosts and even spots the spirit of a girl. She eventually finds out that the said spirit belonged to a girl named Malini who was in love with her husband in the past. With the help of Professor Agni Swaroop (Ashutosh Rana), Sanjana with great difficulty exorcises the ghost and saves her marriage at the same time. This movie made quite the wave because of its bold yet spooky plot. With a budget of 78 cr, this is one of the best Hindi horror movies that went on to become a blockbuster hit by earning 249 cr in revenue! Songs like “Aapke Pyaar Mein Hum Sawarne Lage” and “Jo Bhi Kasme Khai Thi Humne” were topping the charts back in the day.

Director: Mohit Suri Cast: Emraan Hashmi, Kangana Ranaut, Adhyayan Suman, Jackie Shroff IMDB rating: 5.6/10 ll 78% Google users liked this film 2nd installment of the Raaz series, this is one of those Indian Horror Movies that performed quite well at the box office. Away from the usual horror scene of Bollywood, this movie firstly caught the audiences’ eyes through its songs. This in turn led to the audiences wanting to watch and explore what this Hindi Horror movie was all about. Impactful performances by Kangana, Emraan and Adhyayan did justice to the plot. The movie depicts the story of a young model Nandita Mehra played by Kangana Ranaut, her partner Yash Dayal played by Adhyayan Suman and an artist named Prithvi Singh played by Emraan Hashmi. Prithvi paints pictures of a girl who he eventually encounters in real life. Nandita is the girl who he’s been painting all these years. However, after coming in contact with each other, supernatural things start happening with Nandita who is then possessed by a ghost. The ghost happens to be Veer Pratap Singh – Prithvi’s father played by Jackie Shroff. He possesses Nandita as he was betrayed by Yash in a business deal and eventually gets killed. So that’s the plot of one of the most successful Hindi horror movies of Bollywood.

Director: Mohit Suri Cast: Esha Gupta, Bipasha Basu IMDB rating: 4.1/10 ll 75% Google users liked this film Third installment of the super hit Raaz series, this Hindi Horror movie too didn’t fail from giving its viewers a chill down their spine. It’s the story of a successful actress Shanaya (Bipasha Basu) who gets insecure about a young debutant Sanjana (Esha Gupta)! Her insecurity and jealousy leads her to resort to black magic and that’s when supernatural events start occurring in their lives. The story may not sound too scary but the visual effects and scenes are capable of giving any horror movie a run for their money. No doubt it’s one of the best horror movies Bollywood has managed to deliver. With a budget of 180 million, this movie managed to bring in 970 million in revenue, thus making it a super hit. Although the IMDB and viewer rating aren’t impressive with the Raaz series, they were super duper hits in their time at the box office.

Director: Anvita Dutt Guptan Cast: Tripti Dimri, Rahul Bose, Paoli Dam, Avinash Tiwary, Parambrata Chatterjee IMDB rating: 6.6/10 II 88% google users liked this film Although a Hindi Horror movie, this one has a strong storyline and an even stronger social message. It’s the story of a little girl who was married off to a rich older man. She grows up to be a beautiful and brave woman who doesn’t fear anything or anyone. Her charming persona effortlessly hides the deep dark secrets that she carries underneath the veil of happiness.  Things start to get tricky when men in her village start dying mysteriously only to eventually discover that Bulbbul herself is a witch who kills men who torture women. Based on black magic and witchcraft, the cinematography of this movie captures each and every essence of the screenplay that’s required to make its viewers have sleepless nights. From direction to music, to visual effects to acting, this neo-noir theatrical movie is a must-watch for sure!

Director: Amar Kaushik Cast: Shraddha Kapoor, Rajkummar Rao IMDB rating: 7.6/10 ll 92% Google users liked this film “O Stree Kal Aana” Remember how this dialogue went viral soon after this Hindi Horror movie was released? Not just this tagline, the movie in its entirety made quite an impression on the box office. Its interesting storyline and amazing direction made it a huge success. With a budget of 20 crores, Stree made 10 times the profit. It’s a story of a small village named Chanderi in UP where the spirit of a woman tortures men at night, especially during festivals. So the protagonist of the movie i.e Rajkumar Rao decides to unravel the mystery behind the same with the help of his 2 friends. Scary as much as it’s funny, if you are a fan of horror and comedy, then this one justly fits the bill.

Director: Vikram Bhatt Cast: Adah Sharma, Rajneesh Duggal IMDB rating: 6.4/10 ll 86% Google users liked this film If you are into those eerily appealing, classic Hindi Horror movies that also involve a love story, then this one is going to tickle your fancy. This one revolves around a couple in an interfaith relationship. The guy Arjun (played by Rajneesh Duggal), loves the girl, Lisa (played by Adah Sharma) so much that he gives up his faith in her. They eventually end up moving to a manor in Palampur and that’s when paranormal activities start happening around them. Lisa is eventually possessed by a demon and Arjun’s main aim becomes to save her. Loosely based on the exorcism of Emily Rose, this horror movie too is bound to give you the heebie-jeebies! You have to watch it to know what we are talking about.

Director: Priyadarshan Cast: Vidya Balan, Akshay Kumar, Shiney Ahuja, Ameesha Patel IMDB rating: 6.4/10 ll 86% Google users liked this film Not exactly a horror movie but more of a psychological horror film, this Hindi Horror movie too managed to keep its audiences hooked on to their seats with the occasional jumping from the seat out of fear. The plot is such that an NRI couple makes the decision of returning to their hometown and staying at their ancestral home. Despite repeated warnings, the couple doesn’t listen to what people around them have to say about the house being haunted by ghosts. They decide to stay in the house irrespective, as a result, the wife gets possessed by the spirit of Manjulika.  Being a non-believer, the husband calls for a psychiatrist’s help (Akshay Kumar). He comes down from the US to treat Vidya and finds out about her dissociative personality disorder. Their aim becomes to cure her. This movie was every bit as funny as it was scary. Certainly deserves a spot on your watch list.

Director: Pawan Kripalani Cast: Kainaz Motivala, Rajkummar Rao IMDB rating: 4.9/10 ll 70% Google users liked this film The story of this movie revolves around the couple that decides to take a trip out of town while the guy secretly plans on recording a tape of their intimate moments together. Things change for the worst when they experience paranormal activities around them. The story may sound simple, but the events that take place in this movie are goosebump-inducing, to say the least. This one definitely makes it to the best  Hindi horror movies list! Watch it to unveil the ghoulishness.

Director: Akshay Akkineni Cast: Akshay Oberoi, Parvathy Omanakuttan IMDB rating: 6.2/10 ll 80% Google users liked this film This film was remade from the 2012 Tamil film, of the same name, Pizza. Kunal Malkholkar (Akshay Oberoi) is the protagonist of the movie. He plays the role of a pizza delivery boy. He is a married man and his wife Nikita is aspiring to write a horror story. Kunal himself is a nonbeliever. He comes up with a fake story that involves several murders by ghosts and spirits. He does so to dupe his employer. However, things backfire when his made-up story comes to reality and the exact same events start happening with him in real life.

Director: Prawaal Raman Cast: Isha Koppikar, Shilpa Shetty, Vivek Oberoi, Saif Ali Khan, Nana Patekar, Sohail Khan, Sameera Reddy, Aftab Shivdasani, Boman Irani, Antara Mali, Rajpal Yadav, Sanjay Kapoor IMDB rating: 6.3/10 ll 86% Google users liked this film This movie is a composition of 6 different horror stories. It is also one of the most popular Hindi horror movies of all time. Inspired by horror campfire tales, this movie remains fresh in our memories even today. The storyline is such that a group of 6 six friends entertain each other with scary stories that they know of after they have to kill time in a forest after their car breaks down. The stories could scare the wits of anyone! Saif Ali Khan who plays a fashion photographer (Saif Ali Khan) is locked up in a hotel owned by a staunch anti-smoker played by Boman Irani.  Shilpa Shetty who plays the role of a housewife gets tricked by an evil fruit vendor played by Rajpal Yadav. He sells her apples that on eating turn its eater into an apple. These were just 2 of the 6 stories that this movie comprises. If you are into scary movies, then this one’s to watch out for! Watch the full movie to find out what happens to this group of friends in the end. Now that we have compiled this elaborate Bollywood Horror Movies list for you, we reckon that you watch them one night at a time, preferably not alone, and decide for yourself which is the best Hindi horror movie? You can thank us later for making your lockdown better with some of the best Hindi Horror Movies of all time!