A Comprehensive List of 19 Movies for Dumb Charades In Bollywood 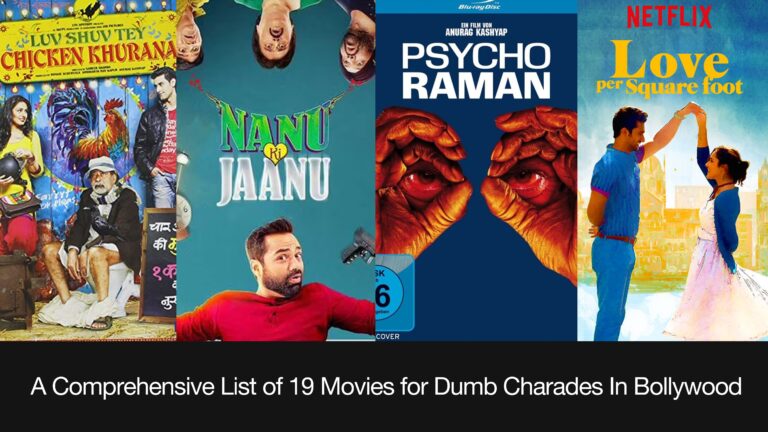 No group gathering is complete without the classic party games, out of which Dumb Charades always takes the cake! Known for being an absolute crowd-pleaser, it engages people from all age groups. Entertaining and highly competitive, this game is for everyone, yes, but especially for the movie buffs! Even the toughest fans sometimes fail to guess the movie, and that’s the beauty of the game loved by most. To make it max level fun though, one needs to keep in mind that the movies for dumb charades need to be picked smartly. Otherwise, if they’re too easy, it won’t get anyone’s adrenaline rising and where’s the fun in that?

To ensure your next get-together is one to remember, we’ve taken it upon ourselves to make a list of films that are not just difficult movie names, but can also be challenging to act out. Take a look!

How do you play the dumb Charades movie game?

Even though dumb charades is a light-hearted game, there are rules to it, just like everything else. If you’re new to it or just need a refresher, read on!

Don’t break any rules while you’re playing the game! You might be irked to cheat to make your team win – but remember that there is no pleasure derived out of the game if you do this.

Set in the rural landscape of Punjab, this movie was the talk of the town among Romantic Movies in Bollywood when it was released back in 2012. What makes it the perfect pick for movies for dumb charades is not the fact that it is difficult to guess, but that it isn’t the first movie that comes to mind even when the opposite team guesses the first word which is honestly mainstream. It’ll be fun to watch the performer do a chicken gesture and even better, try to make everyone guess the second word!

Being of the Hindi Horror Movies that may have not made a mark in the world of dramedy, it will definitely stay in the minds of your friends! Nanu Ki Jaanu is the perfect movie name to perform, and it will be super amusing to enact its letters or words. Not many have heard of this Abhay Deol starrer, and we’re sure that it will make people scratch their heads in confusion, possibly establishing you as the winner if the opposing team takes too long.

Winning a lot of critical acclaim, Psycho Raman is one of the Thriller Movies in Bollywood based around the real-life serial killer Raman Raghav. It is also called Raman Raghav 2.0 but Psycho Raman would be a much more fun title to enact, no? The psychological thriller left everyone reeling with its release, getting into the twisted mindset of a man that kills for pleasure. You can leave your friends reeling too with this mind-numbing suggestion. They will take a while to guess it, but if they’re into crime thrillers as much as we are, then it may be an easy feat when it comes to movies for dumb charades.

With an instantly relatable setting, this romantic comedy brings forth the nuances (which are very real, by the way) of an urban middle-class couple. A feel-good film like this will also crack up some laughs when the performer tries to enact the latter part of the name. It can be an easy guess for rom-com buffs, so maybe get a good sense of who the audience is before you whisper movies for damsharas into the ears of someone from the opposing team.

This Juhi Chawla starrer has quite the name, right? With drama amplified both in the movie and in its title, it makes a great pick for a game of dumb charades. How are they ever gonna guess it if they’ve never heard about it? Gear up for a long evening with this one! From Mehendi to the insinuation of blood, the movie packs a punch in every way! It’s also a great idea to sit down and watch it with the gang if you’re feeling adventurous after several rounds of guessing Hindi movies for dumb charades.

With direction from Kishore Kumar and the soundtracks too, this movie is super quirky and centered around a man who decides to leave all his wealth to the person with the longest beard! Chaos ensues as the main heroes try to outwit one another. Hopefully, the performer is a man with little to no beard, so as to make things super interesting!

You might think that this retro hit that falls under Bollywood Comedy Movies might be easy to enact, but if you’ve also got a group that includes Gen Z, then this is going to be a difficult guess! Amar Akbar Anthony is not just a must-watch movie thanks to its star cast but is also among the must-include in your movies for dumb charades. It’s even more fun in the hands of a person who has seen it more than once, as they will for sure try to bring out each character’s individual nuances.

With a story having a similar plotline to the Home Alone series, Do Ladke Dono Kadke is a quirky name and quite a tongue-twisting one. With a strong focus on keeping things chaotic, this movie gives you an interesting scenario, enacting-wise. Not only does it answer the question Which is the hardest movie name? but its unpopularity makes it a time-consuming deal. If you would like for the game to go on a bit longer, then make sure to loop this movie in.

With drama akin to Saas Bahu serials that you may have seen with your mother or grandmother, Ghar Mein Ram Gali Mein Shyam will have your guests scratching their heads trying to guess the right answer. You can also employ really funny gestures with this one, making sure that everyone in the room cracks up instantly.

A Hindi political satire film that is inspired by true events, the factual correctness of which we’re blissfully unaware, is another movie perfectly suited to the frolic that dumb charades bring. The key rule with dumb charades remains to choose movies that are quirky sounding and not very mainstream, and if you ask us, Miss Tanakpur Haazir Ho delivers in the list of movies named for damsharas.

A Bollywood Drama film from the 90s starring none other than Nana Patekar, Thodasa Roomani Ho Jayen is one of the movie names for dumb charades that will challenge and test the patience of even the toughest movie buffs. Even if you’ve seen the movie, it’ll be super difficult to guess when someone is acting it out for you, thus stretching the game further than its planned playtime. Be prepared with a glass of your favorite liquor to crack this one; you’re gonna need the wits.

Wanna watch your friends howl like wolves and the others not understanding the movie title? Pick this one! Bhediyon Ka Samooh is among your typical Bollywood Hindi Action Movies & drama flicks that center around kidnapping, romance, and family conflict. But that’s not the only great part. Your dinner party is going to be a total giggle-fest once the performer begins their acting attempt when this is picked from your list of movies for dumb charades.

Translating to “Arising From The Surface”, this movie is one of the best Motivational Bollywood Movies released in 1980 was screened at the UN Certain Regard section at the Cannes Film Festival in 1981. For your dumb charades game, you can either choose to go with the Hindi name or the English name, but we feel the former would be a lot more amusing to watch being enacted! It is an essay film based on the writing works of Gajanan Madhav Muktibodh who was a prominent Hindi writer, poet, essayist, literary and political critic in the 20th century.

Already cracking up at the name of this movie? You’re not alone! When we came across it, we knew it would be going right to the list of movies for dumb charades. The plot revolves around a street food vendor along with several more people who reside and make a living in & around Juhu in Mumbai. They engage in a lot of noteworthy comical and romantic endeavors, making this film thoroughly entertaining.

Wondering what is a hard movie to guess? While we all love old-school Bollywood, we can’t deny that their names weren’t mostly only cringe-worthy but also meme-material in today’s social media scenario. Here’s another one that you can use for a few laughs at dumb charades. Murde Ki Jaan Khatre Mein was released in 1985 and scored a rating of 7 on IMDB.

This Dara Singh starrer is sure to stir up some craziness in the room! With the words being super difficult to enact within a stipulated time, this movie from 1981 is another great pick when it comes to movies for dumb charades. Falling under the comedy genre similar to a lot of films from the said decade, it will justify its name and reputation by being a total riot during the game.

Arvind, who is the son of a rich businessman, starts dating his office secretary at the same time he is engaged to marry another woman. With a really complicated family background, he tries his best to find meaning in his life. Now, the plot might seem super intellectual and philosophical, but it is way too much fun when it’s a part of your damsharas movies list Bollywood.

The story revolves around a father who believes in the prophecy that if he doesn’t see his child before he turns 20, then the child will live. The same child is brought up in a religious facility and remains celibate. A tale of love that lends us a title that is absolutely hilarious, this one should be another name on the list of movies for dumb charades in India.

We’re sure you’ve all heard about this movie at least once! It revolves around Byomkesh Bakshy, a guy who has just passed out from college. He agrees to investigate the disappearance of a chemist named Bhuvan. With assistance from Bhuvan’s son Ajit, Byomkesh ties the case to a much larger conspiracy that will ultimately unsettle Calcutta. What’s great about this movie is not just the fact that it is among must-watch Bollywood Mystery Movies. It also has quite the name, which will be slightly time-consuming but super fun to guess!

Now that you’re up-to-date on movies for dumb charades, all that’s left to do is gather up your friends and then spend a Saturday night in!

Image credits: The copyrights of the images used in this post belong to their respective owners. The credits where known are specified under the image - if you're the owner of an image and want it removed, please contact us.
Bollywood Bollywood Movies Entertainment Movies
Share. Facebook Twitter WhatsApp Pinterest LinkedIn Telegram
Previous ArticleWe Asked Brands To Wish Us On Our Birthday And This Happened!
Next Article 12 Best Makeup Brands in India | Indian Cosmetic Brands in 2022