From a Disney Debut to international recognition, join Shweta Tripathi of Haraamkhor and Masaan fame in her journey – A foodie, a rule-breaker, and being a cloud in the play to being the new wondergirl! 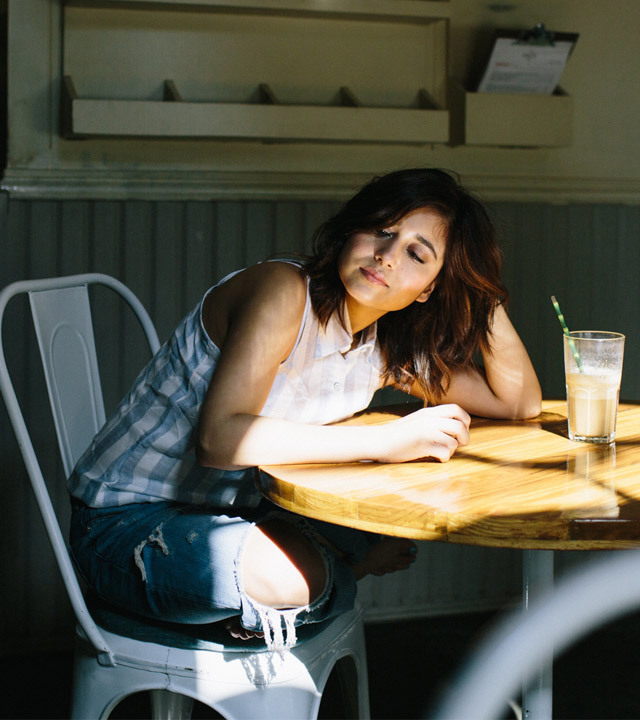 I’m sure we have all wondered what it would be like to meet a celebrity. Will I say the right words? Will I say anything at all? Or just stare at the person, dumbfounded? Or worse, scare them away by being utterly stupid! These were the thoughts that ran through my head on the way to meet Shweta Tripathi. However, all of these were squashed the moment I rang her doorbell.

She greeted me warmly at the door. “Hey! Come on in!” And in that moment I didn’t think of her as a celebrity, rather she was just one of us. That’s no mean feat for someone who is so instantly recognisable. After acting in Vodafone commercials to good old days Disney channel show – Kya Mast Hai Life, which was her very first acting gig as Zenia- to her breakthrough as the lead in Masaan and Haraamkhor, Shweta Tripathi has burst on to the scene. So imagine my surprise when I walked into Shweta’s place to find it looks like any one of ours. On her bed were the books that she was reading, on her nightstand were some really cool Indian comics, a couple of her favourite shoes and all that. “Not really. I actually wanted to be a human rights lawyer. I would see all these things around me, and it moved me, and I really wanted to do something about it and help people” ​

I asked her if she always wanted to be an actor. “Not really. I actually wanted to be a human rights lawyer. I would see all these things around me, and it moved me, and I really wanted to do something about it and help people”, she said. “As for acting, I thought it would always be my passion, and I would make space in my life for theatre as and when I got the opportunity.”

When did she make the switch? “When I came to Mumbai for my internship with Times of India and was cast by Disney for Kya Mast Hai Life. It didn’t all happen overnight. It’s been more than eight years since then.” And let’s take a glimpse of how much she has achieved since! In April, she made film aficionados sit up and take notice when she won the Best Actress award at the Indian Film Festival of Los Angeles (IFFLA) for her debut feature performance in Shlok Sharma’s Haraamkhor. Her second feature film was, Masaan, directed by Neeraj Ghaywan and produced by Kashyap’s production house, Phantom. It was the talk of the town when it premiered in 2015 at the Cannes Film Festival. Along with welcoming a long standing ovation on the night it premiered, the film received the FIPRESCI jury nod and took home the Prix de L’Avenir in the Un Certain Regard category.

“It’s amazing. I always loved acting, from being a cloud to a housemaid, even Mother Teresa, I played all the parts I could in school plays. I never believed I would make an entrance into tinsel town.” 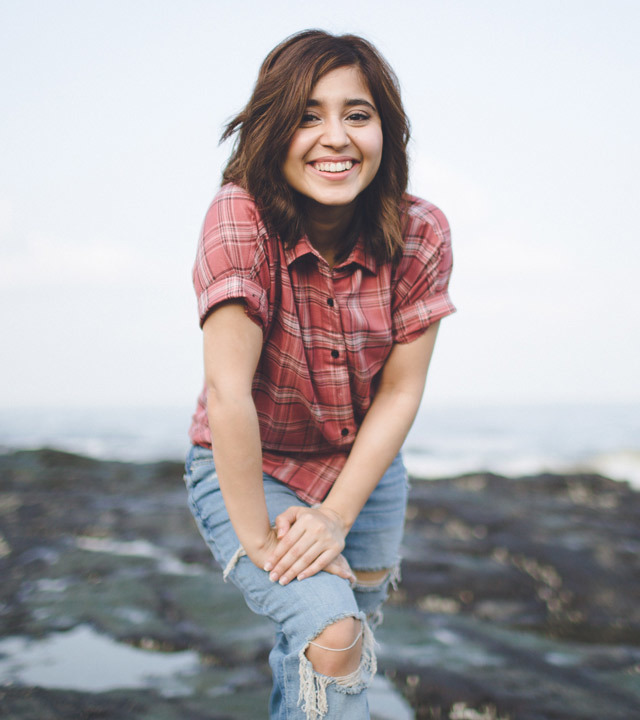 “Oh sure. I remember, once I bunked school and landed in Siri Fort at 7 am in the morning! Of all the places to be at 7 am”.

In her teens, Shweta was often compared to Preity Zinta. Given her spirited demeanour, it comes as no surprise. “I loved that compliment. She was this star, and I was over the moon to be compared to her. But today I am not really a fan of being labelled bubbly”. But there must have been some incidents that gave rise to that comparison, I asked her. “Oh sure. I remember, once I bunked school and landed in Siri Fort at 7 am in the morning! Of all the places to be at 7 am”.

Then there was another time she bunked school to go to a friend’s farmhouse, “So we went to my friend’s place and it had a pool, and all of us had a lot of fun. In the evening my parents were taking me to a fashion show, because my interest in design and fashion had become apparent and they were trying to support it as much as they could, so my mom asked me why was I so tanned, and I said because of the march past session in school. However, later when I was freshening up at home she saw my tan lines that suspiciously looked like I was in a swimming costume earlier and I knew she knew but she never said anything!”, Phew! Close call. So did you bunk often? “Well we did a fair amount of it and roamed around in Khan Market, Defence Colony or any Barista, because it was all the rage at that time, munching on something or the other, mostly street food”, she wistfully recalls. 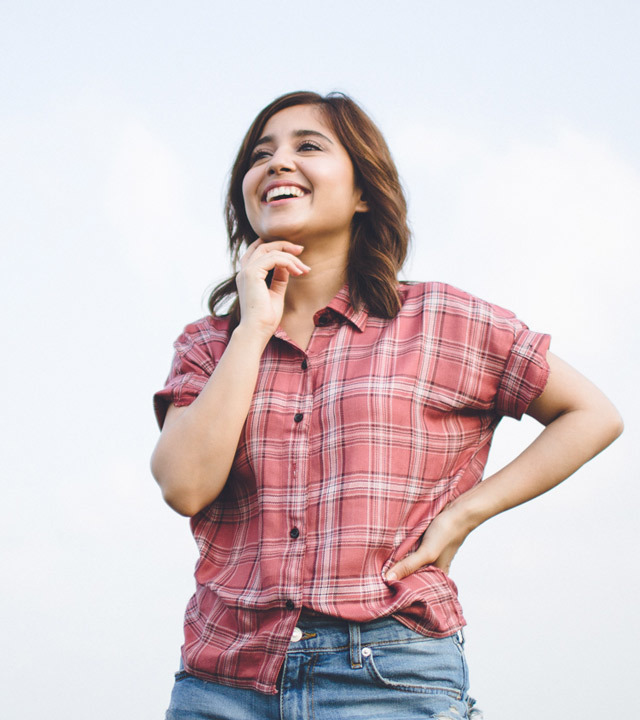 “But I like adrak or elaichi chai rather than a plain one, because where’s the fun in that?”.

Shweta still remains a foodie. ”I have a soft spot for Thai food. I know almost every new joint in the city.” But she is also a fan of a good old-fashioned chai. “But I like adrak or elaichi chai rather than a plain one, because where’s the fun in that?”. (High five there). “I recently discovered the joys of green tea and black coffee in Cannes, in the middle of all the appearances and the buzz,” she recalls. “We were on a champagne and coffee diet, before that I wasn’t sure coffee worked like people say it does, but now I know!”

It’s just one of the perks of stardom. “But I think my friends that take more pleasure in my stardom than I do,” Shweta says, laughing. “I have a close-knit group of friends that support me through and through, and keep my life and emotions balanced. I can always count on them. It’s like all of that celebrity like behaviour that people would expect from me, is projected by them, especially my best friend. That’s the biggest perk of stardom, to me. I like the idea that my family and friends can relish my fame.” 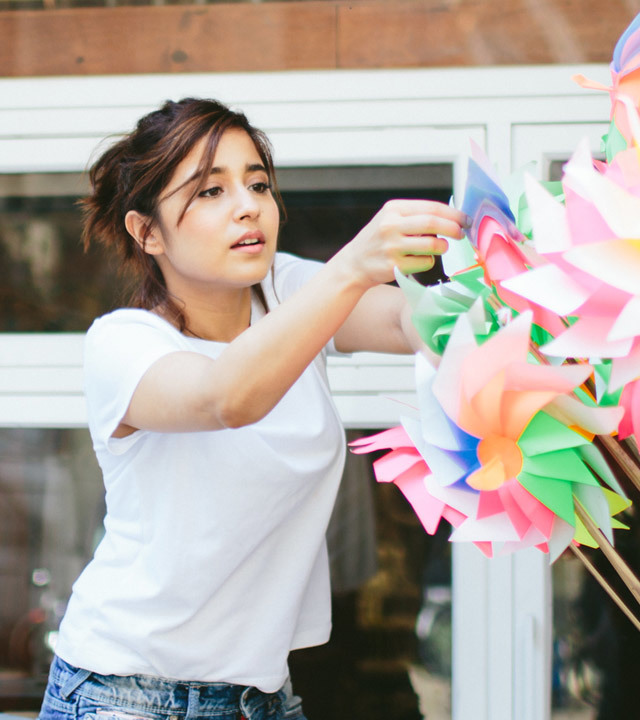 “Well, I think it is fun to question status quo sometimes. Like, I never got the thing about not repeating outfits. I do it all the time, when I think it looks good on me. Only to get screaming calls from my friends chastising me for having done that”.

But no matter how big a star you become, besties are besties. “My friend dragged me out one morning in my pyjamas to go shoe-shopping for her wedding”, she says, laughing. “So we were sitting there scrutinizing shoes like aunties from Delhi, until someone recognized me, and wanted to take a photo. I was dreading it because I was in my pyjamas”, she laughingly recalls. “That’s when it becomes clear to you why people expect a certain propriety or poise from their public figures.” However, Shweta plays by her own rules. “Well, I think it is fun to question status quo sometimes. Like, I never got the thing about not repeating outfits. I do it all the time, when I think it looks good on me. Only to get screaming calls from my friends chastising me for having done that”.

Speaking of outfits, what’s it like to walk down the red carpet? “It’s definitely different. It’s like I never thought walking and standing could be so difficult. But it is. I actually had this one signature pose I would always do, but you observe and you evolve. Luckily for me, I had Richa Chadda who kept advising me on how to go about it.” (only if all of us were lucky enough to have her around to mentor us!) "Hence, I truly believe that instincts always know best! You should learn to listen and trust them and perhaps, that is what makes me a Bewakoof – wanting to do the right thing no matter the cost.”

After all those talks, a plate of breakfast and coffee, I finally asked her, what is the one thing she believes in above all else. “Instincts! I know it’s something you hear all the time, but I do believe that your instincts know what’s best for you. As an actor, the resolve to not do fairness cream advertisements is an instinctual call, because it’s work and promotion, but I know it’s not right. If something is fundamentally wrong, you will question it no matter how good it feels to do it. It doesn’t matter then, that it is the popular thing and everyone is doing it so it is probably is not all bad, that is just you convincing yourself because you know it is not right. And that could be anything from cheating on your boyfriend or hurting someone. Hence, I truly believe that instincts always know best! You should learn to listen and trust them and perhaps, that is what makes me a Bewakoof – wanting to do the right thing no matter the cost.”

Image credits: The copyrights of the images used in this post belong to their respective owners. The credits where known are specified under the image - if you're the owner of an image and want it removed, please contact us.
Share. Facebook Twitter WhatsApp Pinterest LinkedIn Telegram
Previous ArticleDiscovering Drawstrings – The on the go bottom-wear
Next Article Bewakoof Confessions with Sumeet Vyas